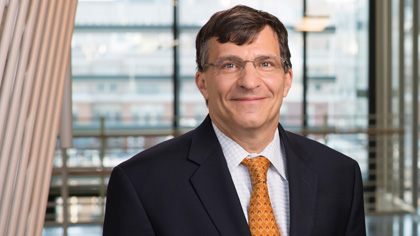 Read a Q&A with Meyerson in the Baltimore Sun about his new book Endowed by Our Creator.

Meyerson joined the faculty in 1985 after serving three years as an instructor at Brooklyn Law School. His professional experience includes three years as a consumer affairs attorney for the New York State Consumer Protection Board. Meyerson's most recent book is Endowed By Our Creator: The Birth of Religious Freedom in America (Yale University Press 2012). He has written three other books and published numerous articles on constitutional law, contracts law, and the First Amendment, some of which have appeared in the Stanford Journal of International Law, Indiana Law Review, Nebraska Law Review, Notre Dame Law Review, Miami Law Review, and Harvard Journal of law & Technology. He is a member of the New York Bar.

Endowed by Our Creator: The Birth of Religious Freedom in America, Yale University Press (2012)

Liberty's Blueprint: How Madison and Hamilton Wrote The Federalist Papers, Defined the Constitution, and Made Democracy Safe for the World , Basic Books (2008)

The Original Meaning of "God": Using the Language of the Framing Generation to Create a Coherent Establishment Clause Jurisprudence, 98 Marq. L. Rev. 1035 (2015).

The Neglected History of the Prior Restraint Doctrine: Rediscovering the Link between the First Amendment and the Separation of Powers, 34 Ind. L. Rev. 295 (2001)