Associate Professor of Law
Co-Director, Center
for Medicine and Law 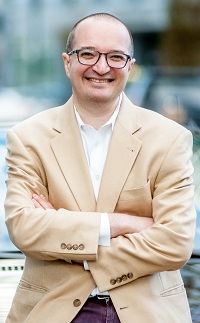 Professor Dolin’s scholarship centers on Patent law with a specific focus on how the patent regime affects innovation especially in bio-pharmaceutical areas.  His work in these areas includes a number of scholarly articles, presentations, amicus briefs, and Congressional testimony.

In addition to his teaching and scholarly responsibilities, Professor Dolin is a co-director of the Center for Medicine and Law. The center with the Johns Hopkins Medical Institutions, operates the JHU/UB School of Law Joint Program for Medicine and the Law. The program aims to shift the focus from the courtroom to the classroom by empowering health providers, attorneys and other stakeholders to work together in a collaborative setting on health law issues. Additionally, Professor Dolin is an Associate Director of the Center for Law of Intellectual Property and Technology.

In his spare time, Professor Dolin travels, enjoys museums, opera (to which he regularly auctions off tickets), translates Russian poetry into English, and consults for various Hollywood shows. He also has a real Russian bear in his office.

Presenter. Fire in the Blood Debate: Access to HIV Medications in Africa, University of Baltimore (March 31, 2014).

Presenter, Should the US Enact Stronger Regulations Against Genetically-Modified Crops? The Pride and Purpose Debate, Hofstra, Hempstead, N.Y. (Dec. 5, 2013).