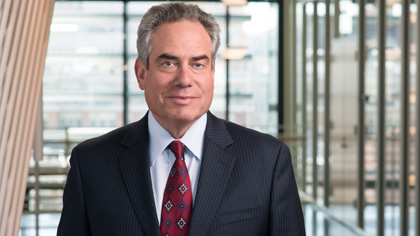 Weich was named dean of the School of Law in 2012, following a lengthy career in government in which he served as an assistant attorney general in the U.S. Department of Justice during the Obama administration and as chief counsel to U.S. Senate Majority Leader Harry Reid and Sen. Edward M. Kennedy.

Weich began his legal career as an assistant district attorney in Manhattan. In 1987, he joined the staff of the U.S. Sentencing Commission, serving as its legislative liaison and representing the commission in federal courts throughout the country in litigation challenging the constitutionality of the Sentencing Reform Act.

From 1990 to 1997, as general counsel to the Senate Committee on Labor and Human Resources and chief counsel to Sen. Kennedy on the Senate Judiciary Committee, Weich advised the senior senator from Massachusetts on civil and criminal justice issues, drug control policy, patient safety legislation, constitutional amendments and other matters.

From 1997 to 2004, Weich was an attorney in private practice at Zuckerman Spaeder, a Washington, D.C.-based law firm with a highly regarded Baltimore office. As a partner in the firm's litigation department, Weich represented clients in courts, agencies and legislatures.

Weich served as chief counsel to Sen. Reid from 2007 to 2009 and in a similar capacity when Reid was minority leader from 2005 to 2006. As principal legal adviser to the Democratic leader, Weich helped to manage Senate floor activity on Judiciary Committee bills and judicial nominations and coordinated related activities of the Democratic caucus. Weich played a key staff role in the enactment of the 2007 ethics reform law, the 2008 amendments to the Foreign Intelligence Surveillance Act and other significant legislation.

Weich was nominated to his post at the Justice Department in April 2009 and was confirmed the following month. As the assistant attorney general for legislative affairs, Weich developed and implemented strategies to advance the department's legislative priorities, coordinated the department's response to congressional oversight, and guided nominees through the Senate confirmation process.

Among Weich's numerous professional affiliations, he has been a member of the advisory board of the Federal Sentencing Reporter, a trustee of the Vera Institute of Justice, a trustee of the Bazelon Center for Mental Health Law and vice chair of government relations of the American Bar Association's Criminal Justice Section. He was named one of the 50 most influential congressional staff members by Roll Call (2007 to 2009) and one of the 105 most influential lawyers in the United States by the National Law Journal (1994). He has published numerous articles on federal sentencing and other criminal law topics.

A Post-Filibuster World Would Be a Nightmare for Progressives, Politico (April 14, 2021)

The Next Attorney General’s Allegiance Must Be to the Rule of Law, Just Security (November 20, 2020) (co-authored with Edgar Chen)

This is why the Senate should not vote on a replacement for Ruth Bader Ginsburg this year, Baltimore Sun (Sept. 20, 2020)

Weich was co-author of an Oct. 22, 2018 op-ed in The Baltimore Sun about mental health parity in Maryland.

In an op-ed published in The Daily Record on Oct. 18, 2018, Weich argues that lifetime tenure has raised the stakes in confirming the Supreme Court nominees.

On the heels of a unanimous decision by the Maryland Court of Appeals to overhaul the state’s money-bail system, Weich contributed an op-ed to The Baltimore Sun about the evolution of his views on cash bail. Read "More work to be done on Md. bail reform" (Feb. 9, 2017).

Weich took part in a Nov. 10, 2016,  Daily Record webinar that explored how the election of Donald Trump could affect the legal landscape in Maryland. (A Daily Record subscription is required.)

Weich was a panelist in an Oct. 25, 2016, discussion titled “A Right to ‘Know’ or a Right to ‘No’? Examining the Congressional-Executive Branch Struggle Over Access to Information.” The event, co-sponsored by The Constitution Project and the Levin Center at Wayne State University Law School, was broadcast by C-SPAN-2. Access the C-SPAN-2 recording.

Weich testified Sept. 13, 2016, before the U.S. House of Representatives Committee on the Judiciary's Subcommittee on the Constitution and Civil Justice. Read his testimony.

Weich contributed an op-ed to The Baltimore Sun, "What constitutes 'justice' for Freddie Gray?" (Nov. 29, 2015)

An  interview with Weich  was featured in an April 17, 2013, front-page story in  The Daily Record .

Weich contributed an op-ed to The Baltimore Sun,  "Fixing the filibuster" (March 10, 2013)

The Daily Record published a letter to the editor from Weich, "'Leveling the Wings' of Legal Education" (Feb. 21, 2013)

The Innocence Protection Act: Death Penalty Reform on the Horizon, 25 The Champion No. 3 at 18 (April 2001)