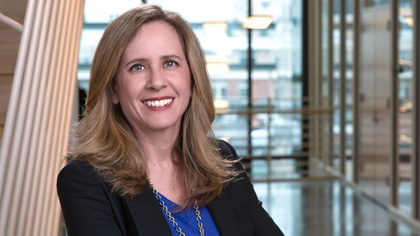 Before joining the faculty, Professor Gilman was a trial attorney in the Civil Rights Division at the Department of Justice; an associate at Arnold and Porter in Washington, D.C.; a law clerk to United States District Court Judge Frank A. Kaufman of the District of Maryland; and an editor of the Michigan Law Review. Professor Gilman's scholarship focuses on issues relating to poverty, privacy, economic inequality, and feminist legal theory and her articles have been published in the California Law Review, the Vanderbilt Law Review and the Washington University Law Review, among others. She was a visiting associate professor at the William and Mary School of Law during the 2005-06 academic year and a professor in the University of Aberdeen summer program in summer 2009. In 2009, she received the Outstanding Teaching by a Full-Time Faculty Member Award.

Professor Gilman directs the Saul Ewing Civil Advocacy Clinic, in which student attorneys represent individuals and community groups in a wide array of civil litigation and law reform projects. She is involved in numerous groups working on behalf of low-income Marylanders. She is a member of the Committee on Litigation and Legal Priorities of the ACLU of Maryland and the Judicial Selection Committee of the Women's Law Center. She is the past president of the board of the Public Justice Center, where she served from 2004-2014, as well as a past member of the Maryland Bar's Section Council on Delivery of Legal Services. She received the 2010 University System of Maryland Board of Regents' Award for Public Service. Professor Gilman is the former co-chair and a member of the Scholarship Committee of the AALS Clinical Legal Education Section, and a former editor of the Clinical Law Review Review and the Journal of Legal Education. She is also a co-director of the Center on Applied Feminism, which works to apply the insights of feminist legal theory to legal practice and policy. She is a member of the Maryland and District of Columbia bars.

Professor Gilman will be a faculty fellow at Data & Society in New York during the 2019-2020 academic year.  She will be focusing on the intersection of data privacy law with the concerns of low-income communities.

Chapter, The Difference in Being Poor in Red States versus Blue States, in Holes in the Safety Net: Federalism and Poverty (Ezra Rosser, ed., Cambridge U. Press, 2019).

Wyman v. James: Privacy As a Luxury Not for the Poor, in The Poverty Canon (Ezra Rosser & Marie Failinger, eds., Univ. of Michigan Press 2016).

The Surveillance Gap:  The Harms of Extreme Privacy and Data Marginalization (with Rebecca Green), 42 NYU Review of Law & Social Change 253 (2018).

Charitable Choice and the Accountability Challenge: Reconciling the Need for Regulation with the First Amendment Religion Clauses, 55 Vand. L. Rev. 797 (2002).

Guest, What If There’s Too Much Privacy?, WashingTech Podcast, Nov. 26, 2019, https://techpolicypodcast.org/what-if-theres-too-much-privacy-with-michele-gilman-ep-211/.

Voices of the Poor Must Be Heard in the Data Privacy Debate, Jurist, May 14, 2019, https://www.jurist.org/commentary/2019/05/voices-of-the-poor-must-be-heard-in-the-data-privacy-debate/

Data Insecurity Leads to Economic Injustice – and Hits the Pocketbooks of the Poor Most, The Conversation, April 30, 2019, https://theconversation.com/data-insecurity-leads-to-economic-injustice-and-hits-the-pocketbooks-of-the-poor-most-116231.

Interview, Elizabeth Brico, “Privacy is Becoming a Luxury”:  What Data Leaks are Like for the Poor, Vice, March 14, 2019, https://www.vice.com/en_us/article/mbz493/privacy-is-becoming-a-luxury-what-data-leaks-are-like-for-the-poor.

Supreme Court Ruling Against Class Action Lawsuits is a Blow for Workers – and #Metoo, The Conversation & Salon, May 21, 2018, https://theconversation.com/supreme-court-ruling-against-class-action-lawsuits-is-a-blow-for-workers-and-metoo-96976; https://www.salon.com/2018/05/22/supreme-court-ruling-against-class-action-lawsuits-is-a-blow-for-workers-and-metoo_partner/.

Three Myths About the Poor That Republicans are Using to Support Slashing US Safety Net, The Conversation & Salon, Dec. 13, 2017, https://theconversation.com/3-myths-about-the-poor-that-republicans-are-using-to-support-slashing-us-safety-net-89048; https://www.salon.com/2017/12/16/3-myths-about-the-poor-that-republicans-are-using-to-support-slashing-us-safety-net_partner/.

Guest, 1A with Joshua Johnson on National Public Radio, “Helping the Poor Put Dinner on the Table Without Giving Them a Seat at the Table,” WAMU-FM, June 26, 2017, http://the1a.org/shows/2017-06-26/helping-the-poor-put-dinner-on-the-table-without-giving-them-a-seat-at-the-table.

Michele Gilman, How the Supreme Court Made Economic Inequality a Whole Lot Worse, The Conversation, March 30, 2016.

Interview, Kaveh Waddell, Would You Let Companies Monitor You for Money, The Atlantic, April 1, 2016.

The Injustice of the Affluenza Defense, Let’s Talk About this Series, Public Justice Center, March 6, 2014.