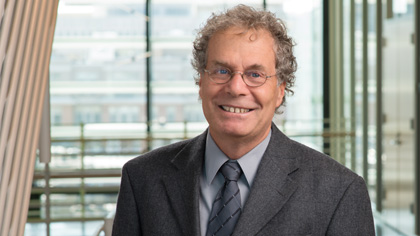 Shapiro joined the faculty in 1985 after six years of teaching at Ohio Northern University College of Law. Previously, he served as counsel to the Ohio Ethics Commission. He has published numerous law review articles in the areas of civil rights, federal jurisdiction and procedure, government ethics, and evidence in the Journal of Legal Education and in the University of Baltimore, Kansas, American, Duquesne and other law reviews.He is co-author of Maryland Rules of Evidence with Objections and has lectured on both Maryland and federal law to judges and practicing attorneys. He is a volunteer attorney for the American Civil Liberties Union of Maryland. He is a member of the Maryland Bar. Shapiro received a Fulbright Fellowship to lecture and do research at the University of Mainz, in Germany, during spring semester, 2001.

Maryland Rules of Evidence with Objections (with Steven Grossman), (NITA, 1995)

The Referendum Process in Maryland: Balancing Respect for Representative Government with the Right to Direct Democracy, 44 U. Balt. L. F. 1 (2013).

The Judiciary in the United States: A Search for Fairness, Independence and Competence, 14 Georgetown Journal of Legal Ethics 667 (2001)

The Use and Effectiveness of Various Learning Materials in an Evidence Class, 46 J. Legal Educ. 101 (1996)

Suits Against State Officials for Damages for Violations of Constitutional Rights: Comparing Maryland and Federal Law, 23 U. Balt. L. Rev. 423 (1994)