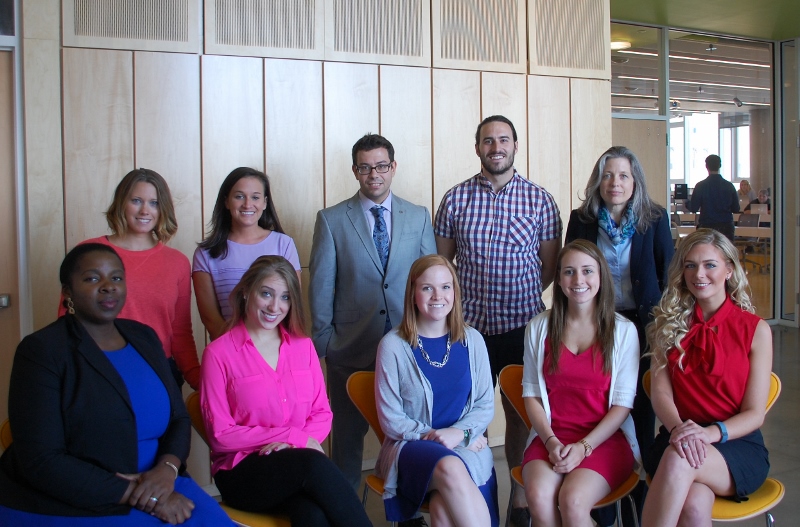 Marleigh Davis is a second year student at the University of Baltimore School of Law.  She graduated from the State University of New York at Oswego in 2014, with B.A.s in Public Justice and Sociology. Marleigh has a strong interest in family law and would like to pursue a career working with children. She is a member of the University of Baltimore Law Review and the Women’s Bar Association. Marleigh volunteered in the fall of 2015 as a tutor for CFCC’s Truancy Court Program. She really enjoyed it, which led her to enroll in the CFCC Student Fellows Program for the 2016 Fall Semester.

Alexandra Hilton is a second-year student at the University of Baltimore School of Law. She graduated in 2014 from Towson University with a B.S. degree in Criminal Justice  and a minor in Family Studies. This combination of sociology and family dynamics has drawn her attention to the CFCC Student Fellows Program in hopes of exploring the intersection of law and the family. Prior to coming to law school, Alex worked as a legal intern for a firm doing insurance defense. She has spent her summers during law school clerking for a judge and for a medical malpractice firm. This semester, she plans to research education policies as they relate to families in the court system.

Samantha Hugo is from the Philadelphia area, where she attended Pennsbury High School and discovered her passion for community service by volunteering at local events. Samantha continued her education in Long Island, New York, by joining the class of 2014 at Stony Brook University. Double majoring in Political Science and Philosophy, Samantha is now using her undergraduate degree to pursue a career in law at the University of Baltimore. With a focus on public service, Samantha hopes one day to be a practicing attorney who can contribute to the facilitation of human rights and social justice for the American family. Samantha currently works at the Annapolis District Court, where she assists and advocates for the rights of victims who have been subjected to domestic abuse.

Taylor LoSchiavo is a second-year UBalt law  student who is enrolled in the CFCC Student Fellows Program.  She received her B.A. with Honors  in jurisprudence from the University of Baltimore in 2015.  Taylor works for Jacobson Family Law in Columbia, Maryland.  She also has been employed as a paralegal in a criminal law practice, where she focused on family law issues, and has worked for Ward Pratz and Associates, a law firm in Glen Burnie, Maryland. Taylor is particularly interested in looking at the law’s impact on the family unit and the lawyer as counselor’s role to help address a family’s problems in the family court system.  Taylor is fascinated by the notion of therapeutic jurisprudence!

Christelle-Grace Lowe is a third-year University of Baltimore School of Law  student enrolled in the CFCC Student Fellows Program.  In 2015, she received her Master’s degree in Private Law with a concentration in Business from the University of Ngaoundere in Cameroon (West Africa). Christelle-Grace has interned at the Office of the Attorney General in Baltimore, where she worked as a mediator in the health care advocacy unit.  She also has interned at a private immigration law firm and has served as a law clerk in the law school’s Immigrant Rights Clinic.  Christelle-Grace is particularly interested in alternative dispute resolution and family law.

Chelsey Seger is a second-year UBalt law student enrolled in the CFCC Student Fellows Program.  In 2014, she received her B.A.in Political Science from Shippensburg University, where she focused on issues related to delinquency, criminology, and gang violence, among others.  Chelsey currently has an externship with the Juvenile Justice Unit at the Montgomery County State’s Attorney’s Office.  She also has served as a law clerk for a medical malpractice and personal injury attorney, and she has interned at Silverman, Thompson, Slutkin & White  and at the Baltimore County State’s Attorney's Office in the Domestic Violence Unit.  Chelsey volunteered as a tutor for CFCC’s Truancy Court Program (TCP) last year and will be participating as a CFCC Student Fellow in the Carter G. Woodson Elementary/Middle School TCP this semester.

Kathleen Seifert is a third-year student at the University of Baltimore School of Law. Kathleen graduated from Towson University in 2013 with a B.S. in Political Science. During college and prior to law school, Kathleen was a clerk at a family law firm, where she worked closely with clients involved in divorce and/or custody proceedings.  This semester, Kathleen hopes to develop an understanding of a therapeutic approach to family law.  She plans to research substance abuse and addiction as they relate to families in the family court system. Kathleen also is enrolled in the Family Law Clinic this semester. After graduation in May 2017, Kathleen plans to remain involved in public interest work, and she hopes to open her own family law firm.

Andrew graduated from the University of Delaware in 2015 with degrees in neuroscience and economics, along with a minor in biological sciences.  As an undergraduate, Andrew performed social psychology research, where he studied cooperative behavior through the lens of game theory.  In addition, he worked as a tutor for a variety of subjects.  At UBalt, Andrew is a member of the National Family Law moot court team, a staff editor on Law Forum, and the treasurer for the University of Baltimore Students for Public Interest (UBSPI).  In addition, he co-founded and serves as treasurer for the University of Baltimore Wine Appreciation Society (UBWAS).  Andrew aspires to help low-income families and children.  He received a UBSPI grant this past summer to work with Project HEAL (Health, Education, Advocacy, and Law) at Kennedy Krieger Institute, and he is currently an intern with the Judicial College of Maryland.

Mary Stover, a second-year University of Baltimore law student, is attracted to CFCC because of its multi-disciplinary, problem-solving approach to family law.  She joins the CFCC Student Fellows program with over thirty years of paid and volunteer public interest experience, including service as director of research and information for a national housing nonprofit, as president of a small local foundation, and as a commissioner for landlord and tenant affairs.  Mary spent most of her youth in northern Michigan.  She earned a Bachelor of Arts in Business at Michigan State University and a Masters in Urban Planning from the University of Michigan.

Roy John (“RJ") Williams is a third-year student at the University of Baltimore School of Law.  RJ received his undergraduate degree from Duquesne University in Pittsburgh, Pennsylvania.  Prior to law school, he worked in accounting and property management.  RJ has served as a Rule 16 Student Attorney in UBalt's Family Law Clinic and in the Pretrial Justice Clinic.  His interests include trading stocks, exercising, and playing hockey. After law school, RJ hopes to practice criminal defense and family law.