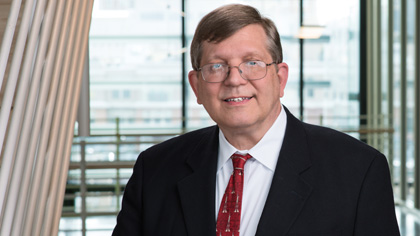 Maxeiner is the associate director of the Center for International and Comparative Law. He is experienced in both academics and practice both in American and in German law. He began professional practice in the Honors Program of the Antitrust Division of the U.S. Department Justice, and was then honored as Humboldt Fellow at the Max Planck Institute in Munich, where he did a doctorate in comparative antitrust law. Returning to practice, he was senior litigation associate at two international law firms in Manhattan, most recently at Kaye Scholer, working principally in intellectual property litigation. Later, as vice president and associate general counsel of Dun & Bradstreet, Inc.. the world's leading business information provider, he represented the company in government affairs, including in international privacy law, database protection and revision of the Uniform Commercial Code. Maxeiner joined the faculty in 2004. He has visited at other law schools, including Rutgers, The Catholic University of America, the University of Missouri-Kansas City, and Stetson. He is a member of the American Law Institute.

Educating Lawyers Now and Then: An Essay Comparing the 2007 and 1914 Carnegie Foundation Reports on Legal Education (2007).

Policy and Methods in German and American Antitrust Law: A Comparative Study (Prager: 1986).

The American Rule: Assuring the Lion His Share, in Cost and Fee Allocation in Civil Procedure: A Comparative Study 287 (Ius Gentium vol. 11, 2011).

Pleading and Access to Civil Procedure: Historical and Comparative Reflections on Iqbal, a Day in Court and a Decision According to Law, 114 Penn State L. Rev. 1257 (2010).

Educating Lawyers Now and Then: Two Carnegie Critiques of the Common Law and the Case Method, 35 Int'l J. Legal Info. 1 (2007).

Why are U.S. Lawyers not Learning from Comparative Law? (with Ernst C. Stiefel), in The International Practice of Law 213 (Nedim Vogt et al. eds., 1997).

Civil Justice Reform in the United States: Opportunity for Learning from Civilized European Procedure Instead of Con­tin­ued Isolation? (with Ernst C. Stiefel), 42 Am.  J.  Comp.  L. 167 (1994).