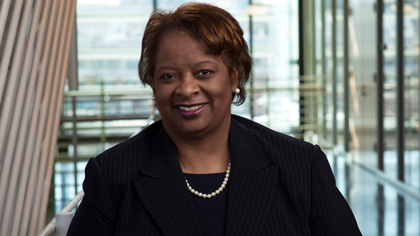 B. A., with highest honors, Bennett College
J.D., University of Pennsylvania

The Banking for All Project

Jones Havard is an expert in financial services regulation and teaches courses in banking regulation, venture capital financing, corporate and commercial law. After graduating from the University of Pennsylvania School of Law, Jones Havard clerked for the late Hon. A. Leon Higginbotham on the U. S. Court of Appeals for the Third Circuit. She held various attorney positions involving complex business litigation including at the U.S. Department of Justice and the FDIC before becoming a professor of law.

Jones Havard’s research interests focus on the nexus between financial products, consumer welfare and systemic risk, analyzed through the lenses of law, economics and race. That analysis often intersects with the underlying policies that deny financial access and economic inclusion. The author of several book chapters and articles, she has testified before Congress and published op-eds in the Baltimore Sun, the Legal Times and the Maryland Daily Record. In 2015, in response to the civil unrest in Baltimore, she delivered a well-received lecture on Fringe Banking, as a part of Divided Baltimore: How Did We Get Here, Were Do We Go?

Previously, Jones Havard served as a co-chair of the Mid-Atlantic People of Color Scholarship Conference (MAPOC) from 2009-2014 and as a member of the Baltimore Financial Inclusion Working Group in 2015. She is the recipient of the UBalt Law Saul Ewing Transactional Teaching Award in 2016, named a 2018 Maryland Top 100 Women and has published articles in numerous law reviews including the Boston University Public Interest Journal, the Cardozo Law Review, the Kansas Public Policy Journal, the Kentucky Law Journal, the New York University Journal of Legislation and Public Policy, the Stanford Law and Policy Review and the Syracuse University Law Review. Presently, she is a member of Women in Housing and Finance and the University of Pennsylvania School of Law Dean’s Council for Penn Women.

Back To The Parent: Holding Company Liability for Subsidiary Banks - A Discussion of The Net Worth Maintenance Agreement, the Source of Strength Doctrine, and the Prompt Corrective Action Provision, 16 Cardozo Law Review 2353 (1995)

Public Land Banking and Mount Laurel II: Can There Be a Symbiotic Relationship? 15 Rutgers Law Journal 641 (1984)