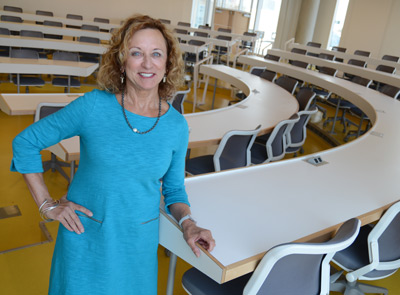 Professor Babb, founding director of the Sayra and Neil Meyerhoff Center for Families, Children and the Courts (CFCC) and director of the Post-J.D. Certificate in Family Law, joined the faculty in 1989 after three years as managing attorney of the Domestic Law Unit at the Legal Aid Bureau in Baltimore, Maryland. Prior to that, she was in private practice for several years with a law firm in New York.

At the School of Law, Babb taught several courses in the family law area, including Family Law, Child and the Family, and the CFCC Student Fellows Program. She led the design and development of the nation's only Post-J.D. Certificate in Family Law, and directed the program until her retirement in 2021. She was a visiting professor at the George Washington University School of Law and taught in UBalt's program in Aberdeen, Scotland.

Professor Babb's scholarship focuses on an interdisciplinary, holistic approach to family law through the application of therapeutic jurisprudence, the ecology of human development, and the creation of unified family courts.  She is the author (with Judith D. Moran) of Caring for Families in Court: An Essential Approach to Family Justice (2019), a book that envisions the family court as a care center, blending contemporary theories with an ethic of care and narrative practice. She also has written on family law issues in the Southern California Law Review, Indiana Law Journal, Family Law Quarterly, Family Court Review, Journal of Health Care Law and Policy and the Maryland Bar Journal, among others. Babb is a frequent presenter at the national and international levels on unified family courts, family justice system reform, and family law decision-making.

In 2016, Babb has served as editor-in-chief of the Family Court Review , the leading interdisciplinary academic and research journal for family law professionals. Babb has served on the Review’s editorial board since 1999. She has written numerous articles for the journal and has guest-edited three special issues. She is an Advisory Board member of the Institute for the Advancement of the American Legal System’s (IAALS) Family Justice Program.  Babb also serves on the Curriculum Committee of the National Council of Juvenile and Family Court Judges (NCJFCJ). She is a past Chair and current Executive Committee Member of the Family and Juvenile Law Section of the Association of American Law Schools (AALS), and she has co-chaired the In House Clinics Committee of the AALS Section on Clinical Legal Education. Babb has served as a member of the Family and Juvenile Law Section Council of the Maryland State Bar Association and has co-chaired the Family Courts Committee of the American Bar Association's (ABA) Section of Family Law. She has served as an Advisory Council member and member of the ABA's Standing Committee on Substance Abuse and has participated in that committee's model national unified family court project.

Babb led CFCC’s consulting and technical assistance work, with court and law reform projects in Maryland, nationally, and internationally, most recently on a comprehensive feasibility study for the Nebraska Judicial Branch to determine whether and how to implement a Unified Family Court pilot project in Douglas County, the state's largest jurisdiction.She continues to consult on family court and family law reform projects worldwide.

Babb was awarded the 2015 Stanley Cohen Distinguished Research Award by the Association of Family and Conciliation Courts (AFCC).

She was designated a Human Rights and Justice Champion by Maryland Legal Aid in 2011. She received a University System of Maryland Regents' Award for Outstanding Public Service in 1999 and the first Benjamin L. Cardin Distinguished Service Award from the Maryland Legal Services Corporation in 1998. In 1995, she received the Women's Law Center's Rosalyn B. Bell Award for Outstanding Contribution in the Field of Family Law. Babb received the law school's FullTime Faculty Outstanding Teaching Award in 2001 and the James P. May Excellence in Teaching Award in 1996.

Babb is a member of the New York and Maryland bars.

Caring for Families in Court: An Essential Approach to Family Justice (Routledge, 2019) (with Judith D. Moran)

Therapeutic Jurisprudence, in Encyclopedia of Criminology and Criminal Justice, (Gerben Bruinsma and David Weinsburd, eds., 2014) (with David B. Wexler).

Family Courts in Encyclopedia of Crime and Punishment, (forthcoming 2014).

Barbara A. Babb & Gloria Danziger, A Comprehensive Approach to Truancy for Baltimore City: A Roundtable Discussion (2007).

Families Matter: Recommendations to Improve Outcomes for Children and Families in Court, University of Baltimore School of Law, Sayra and Neil Meyerhoff Center for Families, Children and the Courts (with Gloria Danziger) (June 2014).

Where We Stand: An Analysis of America's Family Law Adjudicatory Systems and the Mandate to Establish Unified Family Courts, Family Law Quarterly, Vol. 32, No. 1 (1998).

What Is Therapeutic Jurisprudence (TJ), Center for Families, Children and the Courts (April 10, 2014, 10:38 AM). http://ubaltlawcfcc.wordpress.com